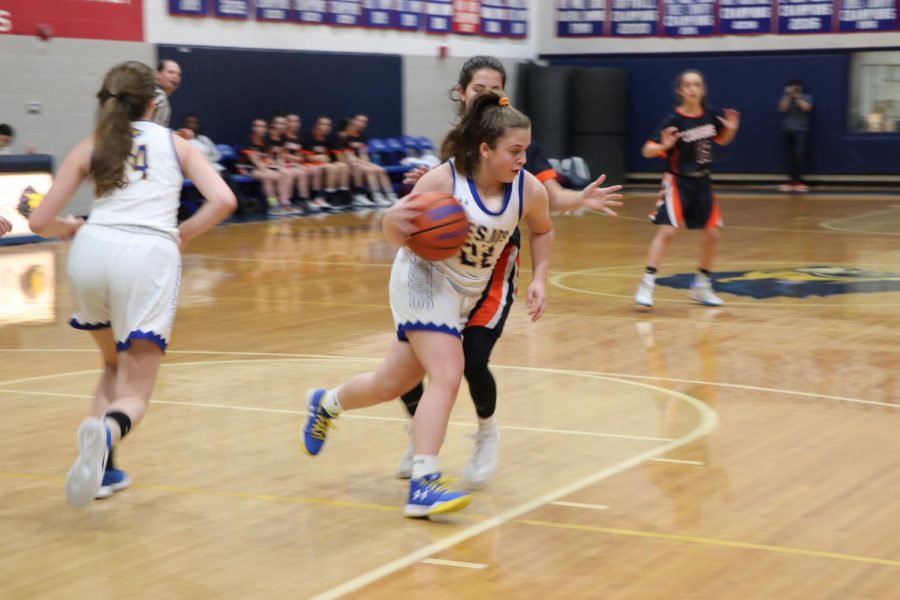 Sophomore Avital Friedman dribbles the ball as she attempts to run past the Cougars to the net.

The CESJDS fan section was on its feet as senior Zach Gross sealed the game on a powerful drive to the bucket with a foul call. “MVP” chants were circling throughout the gym as Gross stood on the free-throw line. On Tuesday, the JDS boys varsity basketball team defeated the Melvin J. Berman Hebrew Academy Cougars 61-47 at home.

To kick off the game, the Lions jumped out to a quick 9-0 lead, a result from a couple of strong finishes by junior Tyler Farkas. This forced the Cougars to call a timeout.

The Lions continued to lead the Cougars throughout the first half. A pair of jump shots from Gross in addition to finishes by junior Jake Rulnick kept JDS in the lead by double digits through the end of the first half.

Early in the third quarter, junior Ariel Gershman blocked a Cougar’s jump shot, and JDS pushed the ball up the court in a transition that led to a strong finish at the rim by junior Yoav Even.

The gym was physically shaking when Rulnick, who is over six feet tall, secured the ball in the paint and threw down a two-handed dunk right in front of the JDS fan section.

Mid-way through the fourth quarter, head basketball coach Dave McCloud pulled out the entire line-up in the game, which consisted of 4 of the 5 starters for JDS, and put a whole new set of players into the game. The move showed McCloud’s complete confidence in his second unit to secure the approaching, but not certain, win.

As the clock ran out in the fourth quarter, JDS fans stormed onto the court to celebrate with the team. After the Lions’ tough loss earlier this season to the Cougars, this victory was uplifting for the team.

“There is so much to this rivalry, there’s so much more intensity and energy, so it is an all around harder fought game which makes it more fun to play in,” Gross said.

Gross finished the game with 17 points, and tied with Farkas, who also scored 17, including multiple crossovers and tough finishes at the rim.

McCloud was satisfied with the teams’ “tough defense” after the win. He said that the energy was reflective of the players’ “Mamba mentality,” referring to former Los Angeles Lakers player Kobe Bryant.

Bryant, an NBA legend, passed away on Sunday, emotionally impacting fans across the world. Bryant’s nickname was the “Black Mamba,” and Bryant popularized his “Mamba mentality” throughout his time in the NBA. This mentality is all about outworking opponents and being prepared for clutch situations with countless hours of practice.

“We talked about [the Mamba mentality] before the game started,” McCloud said. “These guys played hard, and they really wanted this game to prove to Berman that we are the way better team.”

The Lions started out strong, ending the first quarter leading 5-3. The Cougars continued, though, as they scored numerous times to tie the game at 15 before halftime. In the third quarter, the Lions pulled ahead once again and defended their lead for the rest of the game.

Despite missing captain, starter and junior Sophia Miller due to an ACL and meniscus tear last week, the Lions played a great game. Scoring fewer points than they usually average, the Lions still came away with the win due to their strong defense.

“I think they got comfortable relying on Sophia, and yes Sophia scored a lot of points [this season] but you don’t need a lot of points to win,” Athletic Director and girls varsity basketball coach Becky Silberman said. “We scored fewer points without her, but more people stepped up [sic].”

Without the aid of Miller, many team members stepped up and executed rebounds and good defense. Eighth-grader Shani Schwartz scored a season-high of 14 points, and captain and junior Abby Alter scored 12, which lead the team offensively. Silberman also said junior Sally Rogal was great defensively, which was something that Silberman had stressed as being key to the game. She also noted how Alter and sophomore Avital Friedman were able to control the ball throughout the game.

“It’s the little things we need to do,” Silberman said. “We need to score more points but we don’t need to score an insane amount of points. You need to get rebounds, you need to go after loose balls, and I saw more of my girls hitting the floor after different plays, and they went after every loose ball.”

Whenever the Lions and Cougars face-off, students, teachers and parents from both schools come out in large numbers, resulting in loud and crowded games.

“[At a Berman game] the intensity is a lot higher and the pressure is on because there is a much bigger crowd,” sophomore Zoe Fischman said.

At this game, the cheering was taken further as the JDS student section sang songs throughout the game, especially when the Cougars were shooting foul shots.

“At first it [the singing] was funny but a little distracting, but now I’m used to it, so it’s funny,” Fischman said. “It lightens the mood and the stress on the court which is great. It makes us all laugh and smile.”

Going into the game after winning their previous one against the Cougars, the Lions were confident in their abilities and determined to secure the win.