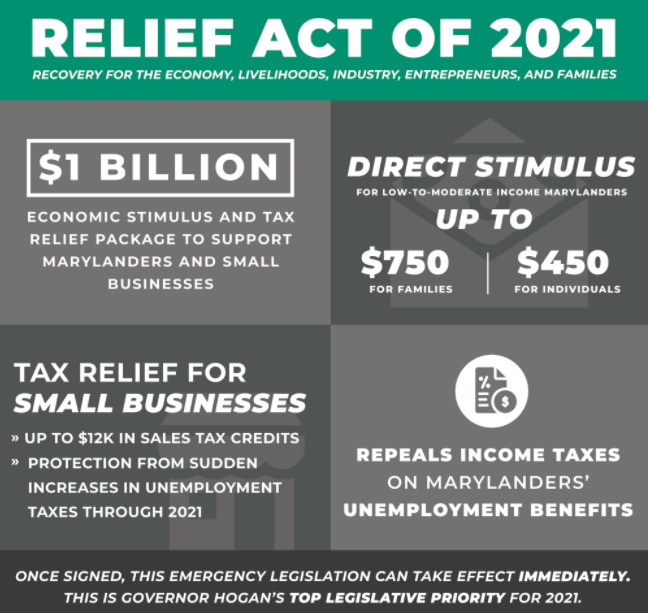 This act includes direct stimulus checks to low through moderate-income families, beginning with the first round of up to $500 for families and $300 for individuals who filed for Earned Income Tax Credit (refundable tax credit primarily for low-through moderate-income Americans). The second round of stimulus payments consists of $250 for families and $150 for individuals. The payments will help 400,000 Marylanders and totals $270 million.

“I really like how both the small businesses and the unemployment [are addressed], I think that really helps,” freshman Oren Israel said.

Next, the governor proposes to repeal state and local income taxes on unemployment benefits giving support to people who lost their jobs due to the pandemic, costing the government $180 million.

Junior Naomi Gould is skeptical about the government giving additional money to Marylanders and concerned with the fund’s source.

“We are going to be very targeted about who we are giving additional money to because money doesn’t come from nowhere,” Gould said. “I would like to make sure it doesn’t go to waste, and rather goes to a good cause.”

“A lot of the bill has to do with small businesses, which is very important, but it seems like he has a big emphasis on ensuring the economy is going to do alright,” Gould said. “Perhaps the bill is not doing enough to directly impact the lives of the citizens.”

The governor may find difficulty getting his bill approved by the Maryland General Assembly, as many Democratic legislative leaders and lawmakers have opposed his bill. Montgomery County Council President Tom Hucker criticized Governor Hogan’s plan saying he should use more of the Rainy Day Fund and the budget fund balance ($500 million) to give checks to all Marylanders.

Maryland Comptroller Peter Franchot asserts that the bill does not provide enough aid and instead, proposes $2000 to families and $250 million to small businesses.

“I think $2,000 is a good amount for people who really need it,” Feigenson-Savoie said.

Franchot points out the “discriminatory federal rules” included in this bill that would not allow immigrants who use ITIN (Individual Taxpayer Identification Numbers) to qualify for stimulus.

Israel agrees the government should provide more aid but not as much as Franchot proposes.

Governor Hogan will submit the RELIEF Act as an emergency bill to expedite the process.

“My hope is that the legislature will join us in quickly pushing this much-needed emergency stimulus and tax relief package and that they will work together with us in a bipartisan way,” Governor Hogan said at a press conference according to the Baltimore Sun.