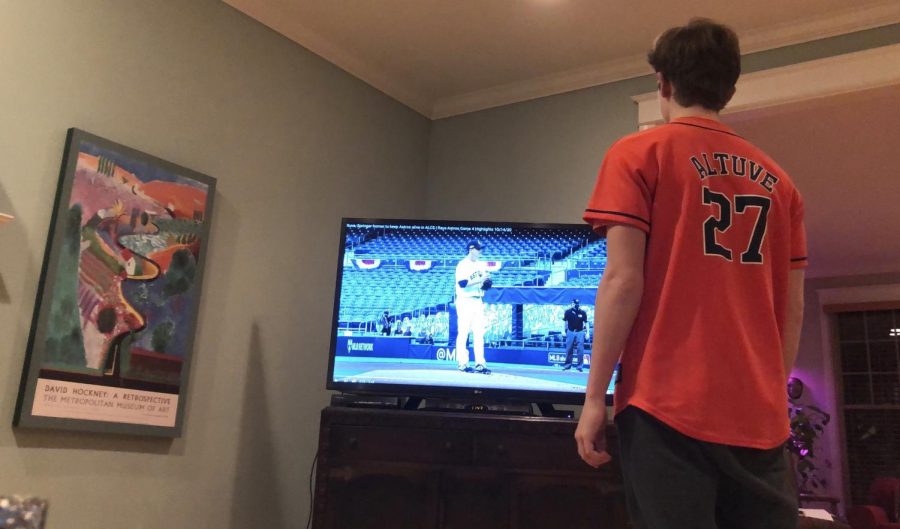 Sophomore Jonah Gross watches a baseball game from home with no fans in the crowd.

Throughout the past year, all the major American sports leagues have undergone drastic changes in the presentation of their sports games, including banning or limiting fans from attending games. The absence of fans has been hard to get used to for many and has made it difficult for some to enjoy the games the same way they did before the pandemic.

Sports leagues have implemented solutions to this problem such as virtual fans or posters of fans, and some leagues even allow up to 50 percent capacity at stadiums with socially distanced crowds. While these solutions are well-meaning and creative, they do not fully solve the problem.

A major entertainment factor of sporting events is listening to the crowd cheer at every little thing that goes right and hearing the crowd’s displeasure when something doesn’t go their way. In many instances, a raucous crowd can make a game feel far more interesting to watch, whereas an absence of fans lessens the enjoyment of watching the game from home.

For this reason, even the most critical and intense sports games have not felt the same this year.

“Not having fans and having fake crowd noise is very different and takes a while to get used to,” Sophomore David Fritz said. ”Without the fans maniacally rooting for their home team, games seem to have less on the line.”

Many sports fans across the nation also seem to agree that games lose their intensity with no crowds. According to Sports Media Watch, television ratings for the NBA finals, MLB Playoffs and the U.S. Open Tennis Tournament all went down over 40 percent compared to a typical season. In total, almost every professional league’s rating declined this year.

Playing in front of empty stadiums has also been difficult for players since they miss the adrenaline that comes from thousands of people watching and cheering for their team. At the beginning of the pandemic, basketball player Lebron James said that “it’s impossible” to play without fans. Lebron’s anger exemplified how difficult it was for the players to perform the same way as they previously would with nobody in the stands.

As the pandemic continues, many professional sports teams will continue to have limited or no fans in attendance at games. The major sports leagues are forced to play the waiting game and hope that once fans can safely return to games, their fan approval will increase again. In the meantime, fans are trying to make the most of this season and be grateful that they can still watch sports games, which have served as a relief for many throughout this dark time.

“The experience is definitely different without fans because the crazy energy, intensity and excitement they bring is not there,” Fritz said. “However, even though so much is changing and uncertain, sports has remained a constant that is fun to follow and watch.”