Zooming from home to school 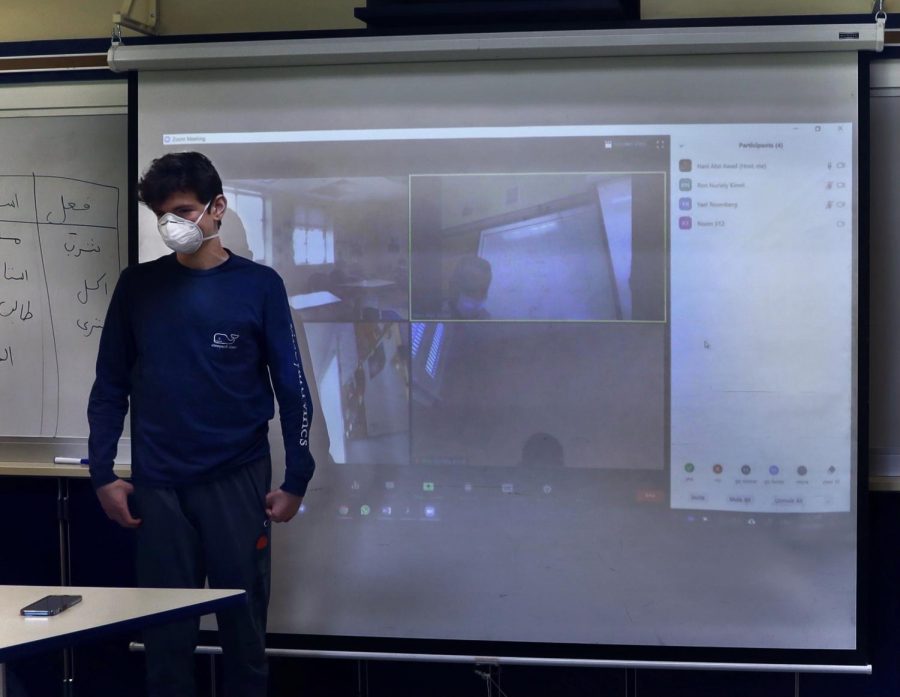 Freshman Todd Lazoff stands at the front a classroom with many of his peers participating through Zoom.

Sitting at home in his desk chair on a Tuesday morning, freshman Ron Nuriely Kimel Zooms into his first-period class. Thanks to a host of new technology in the classroom, Kimel is able to see and hear not only his teacher but his classmates all together as well.

“Some classes are better than others; like I know some classes, they have a designated person to check the chat and see how the people at home are doing, while others are frankly inferior, they don’t really pay attention to those at home,” Kimel said. “But I think overall it’s going very well.”

Director of Instructional Technology Ginger Thornton organized the new system. After trying out much more expensive equipment, the most effective was simply an iPad on a tripod in the classroom and a 360-degree microphone situated among the students.

“It really was a case of having a plan, purchasing a demo piece of several kinds of equipment, testing those out continuing to evolve and test and sort of iterate our way through the problem,” Thornton said.

In person, high school English teacher Melissa Fisanich works around the challenges she faces to have a successful class. It can be hard to teach two different groups of students simultaneously, but she believes that the small kinks will eventually be worked out. While Fisanich acknowledges it would be easier if everyone in the class were able to meet in person, she prefers the new hybrid model to fully-virtual classes.

“But I have a 100% respect [for those staying home]…” Fisanich said, “I cried before I went to school because … if COVID is going to come into our house it’s going to be because of me, that’s a big sacrifice for my family, but we decided that it’s worth it. ”

The fear of contracting the virus is a key reason why some students are opting to stay home. On the other side of the screen, freshman Todd Lazoff did not go into school because his parents decided it was not worth the risk.

“It was kind of weird honestly because there were only like three kids on the Zoom and it was kind of hard to hear people, but I thought it was a fine experience,” Lazoff said.

Despite the new technology in each classroom, students Zooming in from home say that there can be audio issues that impede their ability to hear the entire class clearly. According to both students, getting more microphones in each classroom may help. Regardless, it is a feat of its own to see everyone come together.

“People like to focus on how much has been lost this year — things like athletics and school events and things that we always do — but it does appear to me that there is kind of a silver lining of resilience to all of this [with] how kids have had to tap into reserves I think they didn’t know that they had, and that’s not always a bad thing,” Thornton said.