Senior and junior girls face off in socially-distant powderpuff 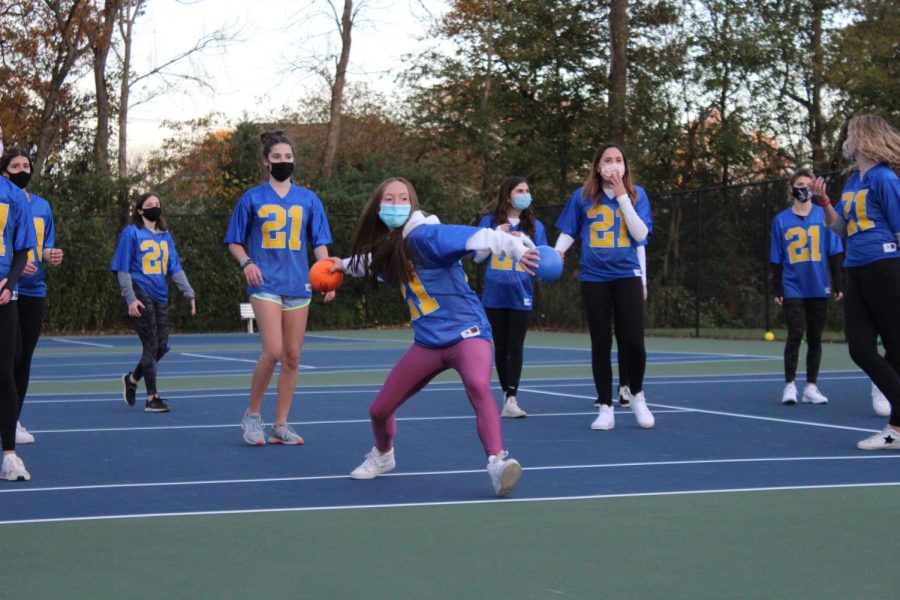 Senior Abby Alter prepares to throw a ball in the second round of dodgeball.

On Tuesday night, the senior and junior girls played their traditional powderpuff game, but with a twist. While they normally play touch football, they played socially-distanced dodgeball this year because of COVID-19. The seniors won all four rounds of dodgeball, adding on to their win in the previous year.

The senior girls came up with the idea to play dodgeball because many girls still wanted to continue the powderpuff tradition but understood that touch football was off-limits because of the coronavirus.

Athletic Director Becky Silberman was in charge of organizing the event. Health screenings, temperature checks and masks were required for all participants. The games took place on the tennis courts, and any fans had to stand outside of the courts in order to enforce social distancing.

“My goal in planning a dodgeball powderpuff event was to ensure that our juniors and seniors felt some sort of normalcy in this very abnormal world we are living in,” Silberman said. “We had to change a few things but overall we had competitiveness, spirit and an overall great time.”

Even though CESJDS does not have a football team, it still holds a powderpuff event like most public schools.

“Powderpuff was initially created by schools who have football teams to give the girls a chance to play football and the boys a chance to cheerlead,” Silberman said. “Obviously, we don’t have a football team but this has become a good way to boost the competitive spirit within the school.”

Senior Jane Trainor participated in powderpuff last year and scored a touchdown. She was excited to hear that powderpuff would still be happening this year despite the circumstances.

“I thought it went really well because I got to see a lot of people that I don’t get to see very often because of [the] coronavirus. It was nice that we got to play a competitive sports game because I haven’t been able to do that in a while,” Trainor said.