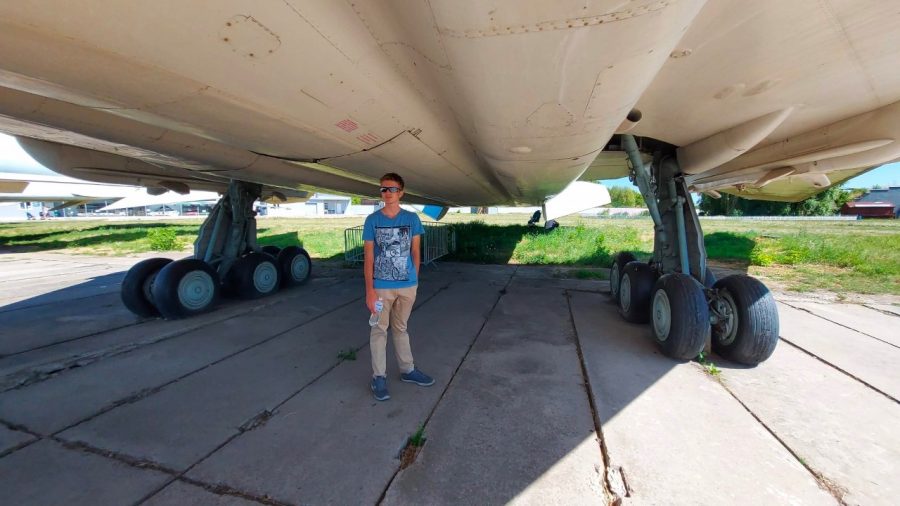 Freshman David Skrynnikov stands at the landing gear of a supersonic aircraft located at the Oleg Antonov State Aviation Museum.

Many lives have changed drastically due to the coronavirus pandemic, but freshman David Skrynnikov’s life looks a lot more different than most. In January, he was living in St. Petersburg, Russia, but a few months ago he moved to Maryland and began high school at CESJDS.

Skrynnikov had lived in Russia for his entire life, and although it was mostly his parents’ decision to move to Maryland, he is not upset with it, saying, “it’s interesting to live in another country.” Moving has also allowed him to live closer to some family members who live in Rockville.

So far, he is enjoying living in Maryland, but COVID-19 made it difficult to travel here. His family first had to travel to Turkey and Ukraine before they were able to fly to the U.S. However, since arriving, the JDS community has been very welcoming and eased Skrynnikov’s transition.

“It’s easy because [the] school community is very interested in students from another country,” Skrynnikov said. “The teachers [use] the personal meetings with me, some teachers [wrote] me welcoming letters.”

Skrynnikov has also found Hebrew easy to learn. He already has experience learning languages, since he knows Russian and a lot of English, as well as some German from his studies in Russia.

However, communication is still somewhat of a struggle for him. Although he knows the English language, his accent poses a challenge.

“Sometimes I have my diction, and in Russian, it doesn’t matter, but in English, it is very hard to pronounce something,” Skrynnikov said.

Aside from academics, being at home all the time has been difficult socially. Skrynnikov, who is at a new school in a new country, has not yet had the opportunity to truly meet his grade and create new relationships.

“It’s very hard to make friends when we have distance learning and Zoom,” Skrynnikov said.

However, he has been able to connect a little with Tom Manov, another student in his grade who speaks some Russian, through bike riding.

Despite the unusual learning environment that students are adapting to, one advantage that Skrynnikov has come to enjoy is sleeping in because he does not have to wake up early to go into the school building. Distance learning also provides ample time to do homework, which Skrynnikov appreciates.

Even though certain elements are challenging right now, Skrynnikov is excited to eventually go to the school building in person and interact with his peers and make friends face to face.