Opinion: Marching for racial justice amidst a deadly pandemic 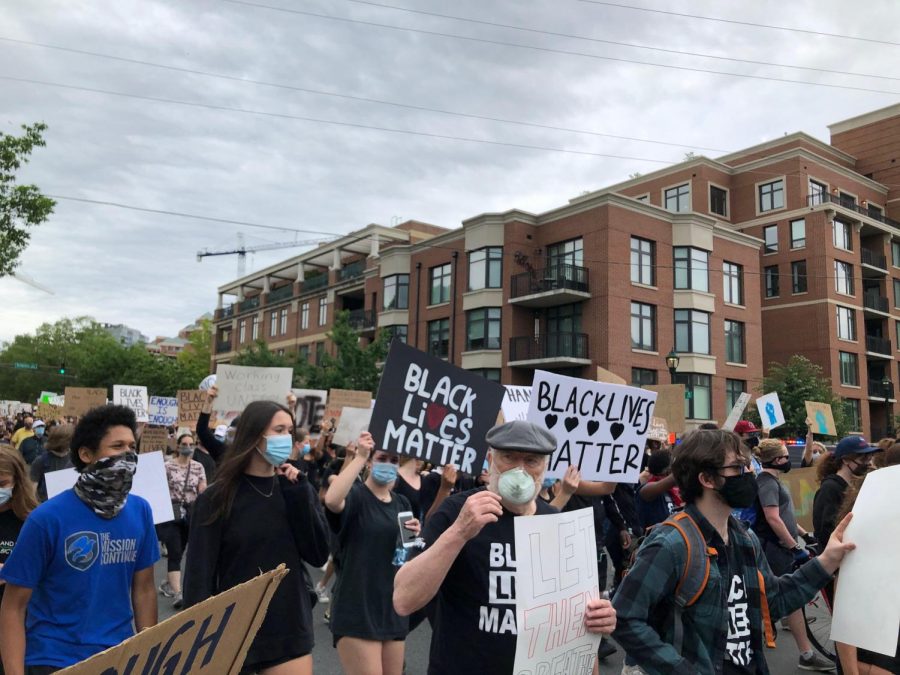 Wearing masks as they march through downtown Bethesda, Maryland, peaceful protesters advocate for racial justice in the U.S.

Screams and shouts could be heard through the marching crowds. “Don’t shoot,” some yelled. Others began chanting “black lives matter” as hundreds marched through the streets of downtown Bethesda in a peaceful protest highlighting the recent deaths of George Floyd, Ahmaud Arbery and Breoanna Taylor, among many other black people recently murdered by police officers.

On Memorial Day, a video surfaced in which Derek Chauvin, a white police officer, was seen kneeling on George Floyd, a black man, on the neck. Chauvin kept his knee on Floyd’s neck for around nine minutes, even when he had been motionless for at least three of those minutes.

In the wake of Floyd’s death, protests erupted around the world and often devolved into violent brawls between police officers and protesters within the U.S. Protests continued even after the four officers involved were charged, with people remaining angry about the lack of racial justice in the U.S.

As I watched from the comfort of my home, I felt powerless not being able to do anything to help such an important cause. I felt confronted by a struggle between the sides and sympathized with every person involved in the protests, as I understood their pain and anger. At the same time, I understood the risks associated with protesting, especially when the protests can become violent when police get involved.

On Wednesday, I found the perfect opportunity to get involved and take action with this issue I felt so passionate about.

Students at Walt Whitman High School in Bethesda, Maryland organized a non-violent protest in which everyone was required to wear masks and abide by social distancing guidelines. The protest began at 1 p.m., with hundreds of people lining up in the Connie Morella Library parking lot with signs, many stating, “Black Lives Matter,” “Enough is Enough” and “End Racism.”

The protest began with many speakers of all colors sharing their feelings about racism and injustice in this country. The energy was high as speakers became emotional.

At 3:15 p.m., starting on Arlington Road, we poured into the streets of downtown Bethesda and began making a loop around Bethesda Row.

As we began marching, store owners came out of their shops, taking videos and pictures, and news crews came to interview many who were marching.

“I can’t breathe,” we yelled as we marched down Woodmont Avenue and past many boarded-up stores that took precautions against potential riots.

Montgomery County police officers moderated the protest, blocking roads and riding bikes alongside us as we protested. Fortunately, the protest remained peaceful despite the fact that tensions were high and many chants were directed toward the officers.

Even while we are in the middle of a pandemic and sometimes it can feel pointless to attend protests, it is important to know that there are many opportunities outside of bigger cities in which protesters stay peaceful and abide by social distancing guidelines. I would recommend attending one of the protests occurring in the many cities inside of Montgomery County as they are well moderated and an important outlet in which to voice your feelings about racial injustice in the country.