All around the globe: World languages at JDS 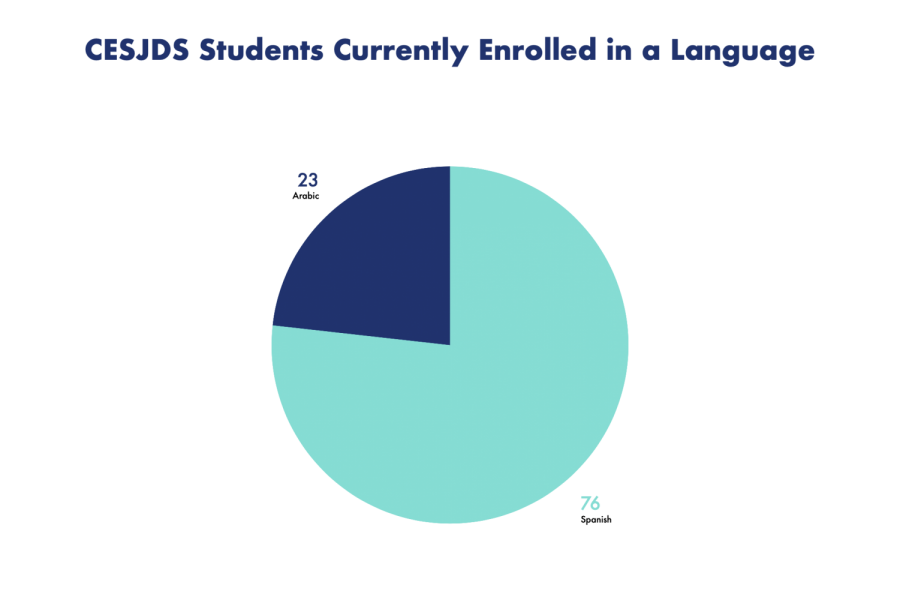 Almost 100 JDS students are enrolled in a language other than Hebrew, with the vast majority being enrolled in Spanish.

While many students choose to fill their elective slots with arts or sciences, junior Danielle Azachi decided in freshman year to enroll in both Spanish and Arabic as her electives. In addition to being fluent in English and Hebrew, Azachi wanted to increase her communication skills with people around the world.

“Spanish and Arabic had added to my ability to communicate with others and understand some difficulties that people have when they go to a new country and don’t speak that specific language,” Azachi said.

According to World Languages Department Chair and Spanish teacher Dr. Silvia Kurlat Ares, students choose to take languages at JDS for a variety of reasons.

Other times, students are drawn to take language classes because they have family members who live in either Latin America or Israel, and they want to be able to communicate using those languages. Sophomore Naomi Gould’s maternal side of her family is from Chile, and that was one of the factors that played into her decision to take Spanish.

“I am very connected to that side of my family and that part of my heritage, so I have always known that when given the opportunity to take Spanish that I wanted to [take it], ” Gould said.

Kurlat Ares thinks that taking language classes helps students gain skills such as problem-solving and critical thinking that they can apply to other classes and that prepare them for the future by opening up new opportunities.

“Developing proficiency in a language opens your career prospects later on. Skills in languages other than English also open a lot of opportunities when you go to college,” Kurlat Ares said. “So, the earlier you start, the more opportunities you have later on, and a lot of people are very aware of that, so they try to do that.”

Another benefit of taking either Spanish or Arabic at JDS is that the programs are very successful. Every year students enrolled in Spanish take the National Spanish Exam (NSE) which compares their performance in the language to the rest of the country and state. Last year, 79 percent of JDS students received a medal whereas only 34 percent of students who took the NSE in the state of Maryland received a medal.

“If you look at the numbers with what happened in our program over the last few years, we keep coming as the program that performs the best at the state level in the National Spanish Exam,” Kurlat Areas said.

Consistent with the JDS’s educational philosophy, the World Languages Department prides itself on giving each student individualized attention and setting them up for success.

“We are very proud of the kids. We make sure that every single kid that comes through our program is successful,” Kurlat Ares said. “We work incredibly hard at personalizing whatever you need and make sure that we meet your needs and make sure that whatever we do we do thinking about that class, that group, that kid. … It is very individualized.”