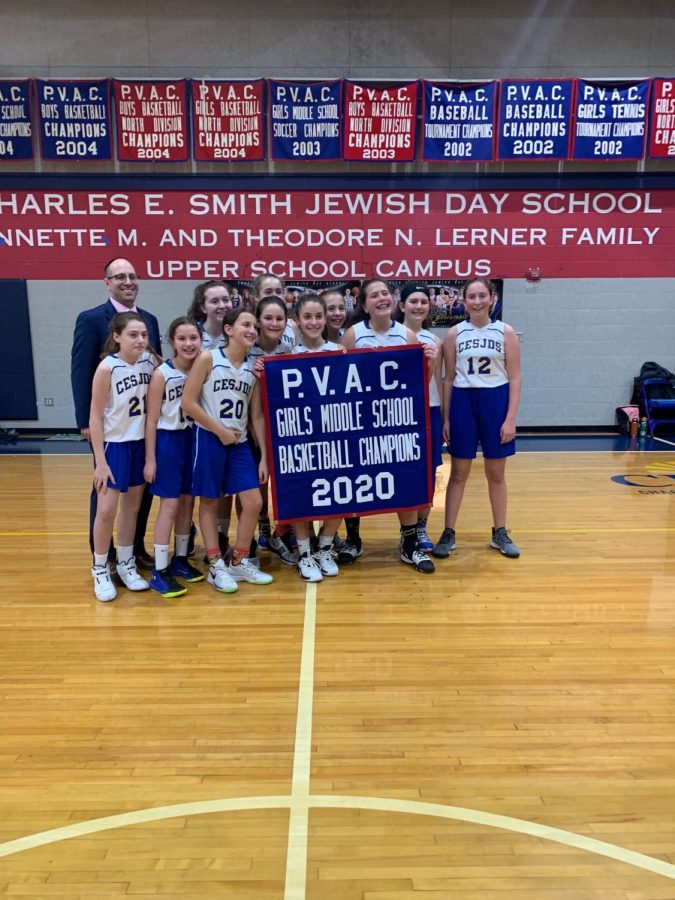 The girls middle school basketball team won the championship at home in an intense game. After playing an extra three minutes of overtime, JDS won with a final score of 24-22.

Brett Kugler, a high school learning specialist and the middle school girls basketball coach led the Lions in a chant at the start of the game. The stadium was filled with excitement, but the Sandy Spring Wildebeests went on to win the tip-off and scored on the first possession.

Both teams were aggressive with star players rising to the occasion. Seventh-grader Leah Krisler put up the first points for the Lions.

After a couple of strong defensive plays, the Lions ended the quarter virtually neck-and-neck with the Wildebeests, trailing by a score of 7-6.

JDS took their first lead of the game after some more defensive stops leading to better offense. The basket resulted from a quick steal, which led to a fast break and an easy score for Krisler. The Wildebeests continued to battle, though, and pulled ahead after hitting a crowd-silencing three before the end of the half. JDS was still losing by a sizable margin of 9 to 12 when the half ended.

As the game continued, the Lions remained physical on defense, which resulted in multiple defensive stops. Although the Lions continued to pressure the Wildebeests, the game seemed to be opening up as more scoring opportunities for Sandy Spring led to their 19 to 14 lead by halftime.

With 4 minutes left in the game, the Lions defense came up with some more crucial stops and managed to cut their deficit by 2 points. With 45 seconds to go and a chance to tie the championship game on the line, coach Kugler called a timeout to motivate and relax his team.

“No matter what the score is. . . if you put everything out there and lay it on the line and push yourself you can accomplish things that you never realized,” Kugler said during the time out.

Right after the timeout, Krisler passed the ball to eighth-grader Zoe Epstein who passed to Ellie Fischman with only seconds left. Fischman then made the game-tying shot, prompting many in the gym to jump out of their seats with excitement.

“We weren’t winning by that much so we still had to push and keep going . . . but it felt really good,” Epstein said.

After a back and forth over time, Epstein capitalized on a Sandy Spring mishandle and banked a shot into the basket giving the Lions the lead in overtime. In a heartbeat, Sandy Spring tied up the game at 22 points, but with less than a minute on the clock, seventh-grader Bianca Diamond scored to give the Lions a two-point lead. The crowd jumped up in excitement as a come-from-behind victory appeared within grasp.

“When 200 people show up to a middle school game it is a tremendous force and you can feel that in the gym, but at the same time I coach the girls to think of it as playing in their backyard to play calm and level and play smart. It doesn’t matter how big or small the crowd is if you just work together as a team, you are going to come up with some great stuff,” Kugler said.

After the buzzer sounded, fans and players realized the magnitude of the win. The crowd stormed the court hugging the players as well as coach Kugler, capping off a significant and momentous night for the team.

“When all of those girls work together out there to put a product out there that everybody feels like they can’t walk away from, that’s a mark of a great team. They were great,” Kugler said.