The percentage of students planning to attend the Irene and Daniel Simpkins Senior Capstone Israel trip is on the lower end of the average range of past years. 66 of the 82 graduates, or about 80 percent of the class of 2020, plan on attending, according to High School Principal and Associate Head of School Dr. Marc Lindner.

However, these numbers are subject to change until the students depart on Feb. 23.

The administration says that since 2013, between 78 and 90 percent (an average of 84 percent) of each senior class has attended the trip, the culmination of each class’ JDS experience. Last year, 82 of the Class of 2019’s 95 students, about 86 percent, attended the trip.

“We would like for the participation rate to be as high as possible every year … It’s on the lower end of the range of what it has been the last several years, but there have been lower years, and to the extent students who are not attending are sharing their reasons, those reasons are what we would expect. For example, some of the students are going on gap year programs next year,” Lindner said. 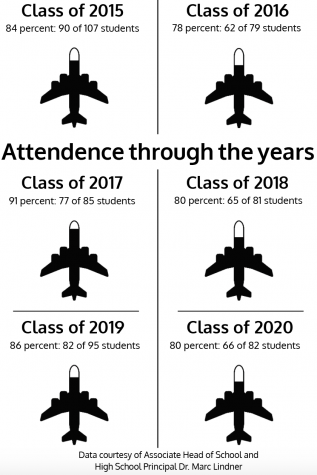 Senior Mattie Watson, who is going on a gap-year trip with an outside Jewish seminary, said that a fifth of the class is not attending the capstone trip mainly due to gap-year trips and financial reasons. In addition to her gap-year trip, she decided not to attend the trip due to financial and social circumstances.

“I always wanted to go on a gap-year, and my parents at first said no and said that I had to go on the [Israel] trip, and then they changed their minds,” Watson said. “A lot of my friends aren’t going, which was also a factor in my decision to not go with my class.”

In a survey of the 42 seniors, of those not attending the trip, over 11 percent said they were going to work or intern instead of attending the trip, and over 7 percent noted gap-years as their main reason. Another 7 percent cited financial reasons. The total cost of the trip, including the Eastern Europe portion, is $14,000, according to the JDS website.

A host of other reasons, many of them personal, were also raised by students in the survey.

Senior Ryan Bauman, who is going on the trip, said that while he would encourage every student to go on the trip, he is not particularly concerned about the impact of a fifth of his grade not attending.

“At the end of the day, the Israel trip is your last chance to be with the grade not in a school setting,” Bauman said. “I think it’s going to be a different vibe this year than usual because normally the trip is a good grade bonding-type of experience.”

Jewish history teacher and alumnus Dr. Dan Rosenthal (‘00) echoed Bauman in that the trip gave him a chance to connect with those that he did not consider to be his closest peers.

To Rosenthal, the Israel trip was the “the light at the end of the tunnel,” meaning it was a reward for high school students after years of undergoing rigorous education.

“It was the culmination of everything that we’d learned; being able to sort of put that into practice, to see the actual things that we had been studying. But, it also just gave me a lot of real-world experience,” Rosenthal said. “ … It creates this connection to Israel that you don’t have otherwise. It serves as this capping off of your high school experience, ending it in a really positive way.”