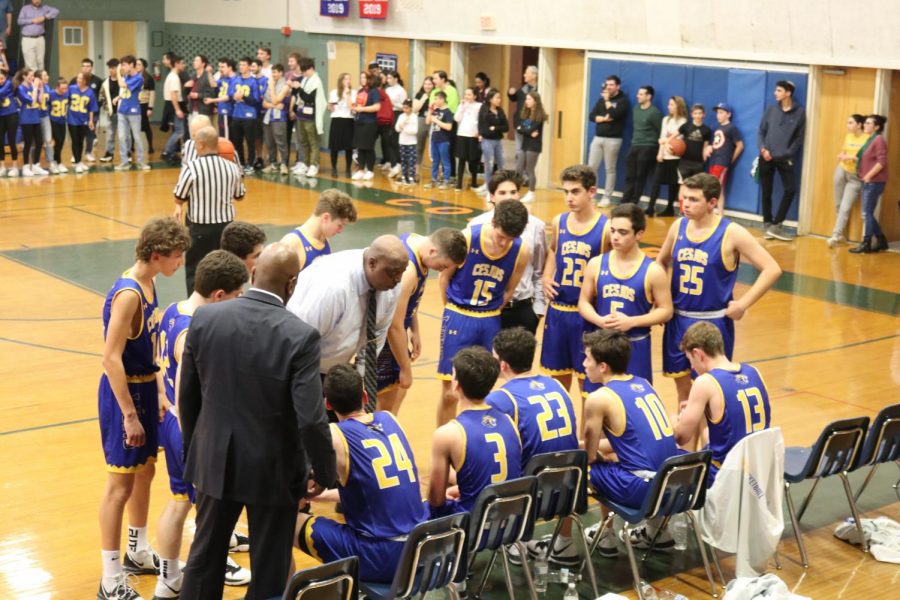 The Lions huddle with their head coach, David McCloud.

The Lions maintained their lead in the second quarter. Their plays contained a lot of passing and teamwork, but they were unable to make some of the baskets. Sophomore Eli Gordon and freshman David Fritz got playing time this quarter, and the Lions led 23-21 at halftime.

The Lions fought hard to stay in the game during the third quarter, but they missed some shots and struggled on defense. The Cougars pulled ahead, with strong defense and 19 points in the third quarter, which ended with a two-point Cougar lead.

The fourth quarter remained very close. In the last minutes, the Lions were leading 53-52. However, the Cougars were able to score. Lions head coach Dave McCloud called a time out and set up a play with 10 seconds to go. The Lions struggled to overcome the Cougars’ defense, and, in the last second of the game, Gershman attempted a three-pointer but missed.

This was junior and captain Brian Epstein’s first game back after recovering from a back injury. Epstein had 2 points, 2 fouls, 3 turnovers and 1 rebound.

“I have not touched a basketball in two months,” Epstein said. “Obviously, I do not want that to be an excuse for why I did not play as good as I usually play. It is just upsetting being uncomfortable when I touch the ball.”

The team felt like they had reached their full potential. They look forward to working on their defense and making baskets in preparation for the home game against the Cougars.

“I think [their playing] came together a little later. It was hard for them though,” Director of Athletics Becky Silberman said. “I think we are the better team, but we did not play like it tonight.”

The Lions will be playing the Cougars at JDS on January 28.