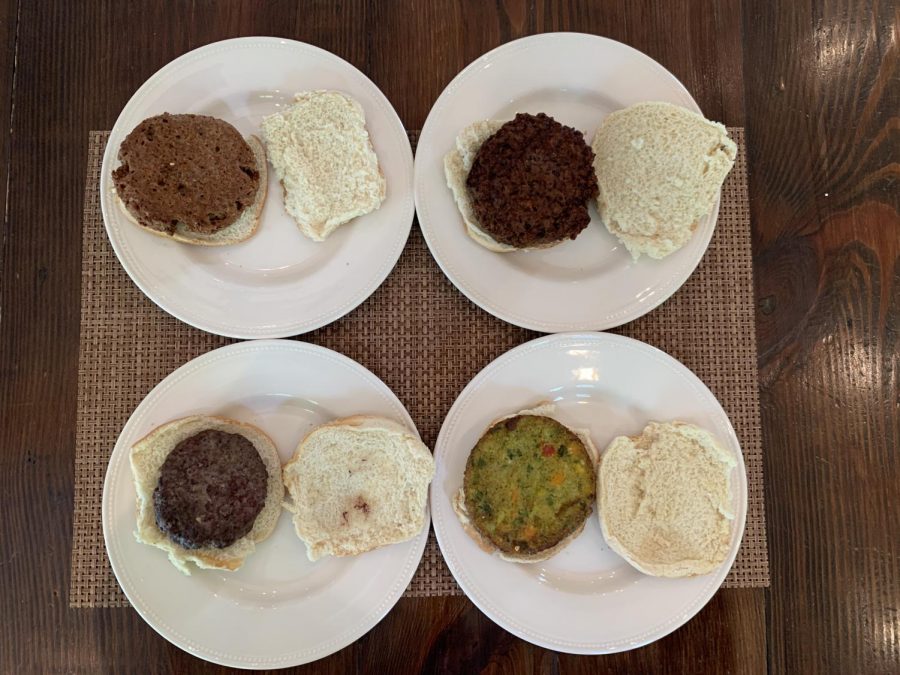 Over the past year, meatless burgers have been growing in popularity. Marketed to vegetarians and environmentally-conscious omnivores, the meatless Impossible and Beyond burgers have been getting closer and closer to real meat in taste, texture and design.

Just recently, Impossible Foods’ “meat” started to be sold in grocery stores (Wegmans on the East Coast) rather than just through licensed restaurants, something that Beyond Meat had been doing for quite some time.
Naturally, I had to put Beyond Burgers and Impossible Burgers to the test, comparing them to each other, an old-fashioned veggie burger and a real beef burger.

Packaging and Appearance
Impossible “meat” came tightly packaged as a clump of “meat,” which closely resembled real ground beef. The granules that made it up were red, and it was very juicy. However, it smelled repulsive before it was cooked. Other than the smell, it would have been pretty easy to mistake it for less-dense real ground beef.
After being cooked, the Impossible Burger was almost indistinguishable from a real burger. It was larger, though, because it did not condense or have fat melt from the heat.

Taste and Texture
The Impossible Burger’s texture was almost identical to a real burger, but it was somewhat denser. The outside was slightly crispy, and the inside was juicy. It was slightly less crumbly than a real burger, however.
Its taste, although similar to a real burger, had a faint muskiness in the background, almost as if I was eating a handful of moss. Other than this muskiness, it mostly lacked flavor. What little flavor it did have luckily resembled the flavor of a burger.

Packaging and Appearance
Beyond Meat’s burger came in the form of two patties that looked like lighter and green-tinged real burger patties. Their packaging was extremely excessive, however, which somewhat goes against the company’s goal of helping the environment.
Once out of the oven, the Beyond Burger had odd holes, textures and color that combined to make it quite unappetizing. Luckily, its flaws were less noticeable when it was in a bun.

Taste and Texture
The texture of the Beyond Burger was somewhat mushy, and it was less dense than a real burger. It felt like eating an extra chewy sponge that was easy to tear apart with my mouth.
The Beyond Burger tasted similar to the Impossible Burger, but its mushroomy muskiness was even stronger and more prevalent, almost like the sharpness of sharp cheese. It did not really taste like meat, but it also did not really taste like the pea protein that it was primarily made with.

Packaging and Appearance
Unlike the Beyond and Impossible Burgers, veggie burgers do not try to emulate real ones. The veggie burger I had unsurprisingly looked like a corn patty as corn was its main ingredient. It came in a pack of four, all frozen and in plastic wrappings.
The appearance did not change much after being cooked, either; it merely got a bit darker on the outside.

Taste and Texture
The veggie burger had a nice crunchiness on the outside. Its inside, however, was full of an uncomfortable mush, with whole peas and corn kernels.
It tasted exactly like it looked: a mashup of vegetables, primarily corn. Not all veggie burgers taste this way, though; mushrooms are another common base for veggie burgers.

Verdict
Beyond Burgers do not seem like their purpose is to emulate real burgers. Instead, they seem like they are meant to be improved veggie burgers. Their pea protein base (rather than soy protein) results in an oddly-colored mushy mess with an overpowering musky flavor.

Impossible Burgers, however, are quite similar to real burgers. Their crunchy outside and soft, dense interior resemble those of a real burger. Despite their musky background flavor and unbearable stench when raw, Impossible Burgers are far superior to Beyond Burgers because of how much closer they are to actual burgers.
They aren’t a good substitute for real burgers yet, but they are a leap in the right direction.