Lions overpower Knights with the help of a full team 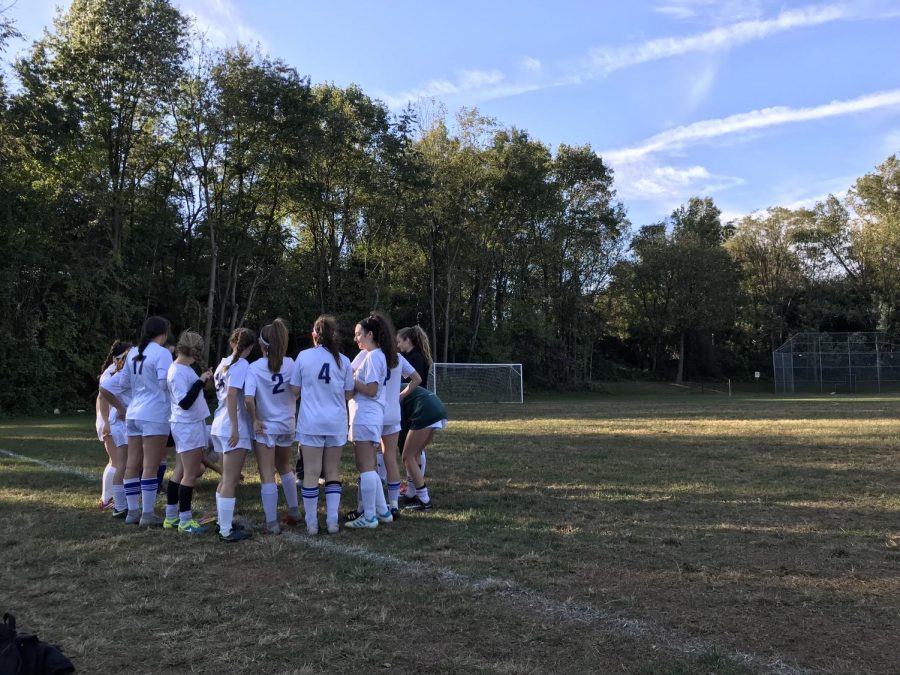 Girl's varsity Soccer gathers to discuss strategies, prior to the game.

The girl’s varsity Lions team dominated the field, claiming an impressive and cohesive 3-0 victory against the Washington Waldorf Knights at CESJDS on Monday afternoon.

Within seconds of the start of the clock, the Lions insistently pushed the ball to the opposite side of the field, where junior Ally Knapp, among others, took numerous shots, eventually leading Knapp to assist sophomore Talia Kraner in scoring the first point of the game.

By the end of the first half, the Lions expanded their lead and efforts, and played a “good collective soccer game,” according to sophomore Abby Alter. With such a triumphant lead through the overwhelming good shots, touches, and possession, Alter was optimistic about the success of the team saying, “Waldorf has a lot of stuff coming for them in the second half.”

Throughout this season, the Lions have never failed to disappoint, with a record of 6-3, leaving the team in good hands before playoffs. This past game was particularly special for the Lions as junior Hailey Weiss returned to the field as a goalie, after a month of being concussed.

“It’s always a relief to have your goalie back since it hurt us even more since I had to take a positional player to fill the spot, which is never what you want,” coach Jay Matula said. “It’s good to have her back, but more importantly, it’s good that she is healthy. She is playing very well; there isn’t much to do, but where she is needed, she has done well.”

The Lions showed an overwhelming amount of support for Weiss as she played in the first and second halves. Though she couldn’t play the entire game and co-captain and senior Rebecca Klayman was substituted in, much of the communication on the field was cheering and supporting each other through the quintessential adrenaline rush and return.

“This game [was] very good: We [were] more energetic, showing energy on the field. [In past games,] we have let the game and ball come to us, and not do what we wanted to with the ball,” Matula said. “We’ve been more at the front foot with it, so we play how we want to. We are hardworking and think the game very well, it’s just trying to put the game together in 80 minutes, without letdowns.”

In adherence with making an effort to support one another, co-captain and senior Naomi Alter believes that the communication improved within the field, and made a drastic improvement between the halves. During halftime, Matula capitalized on communicating with teammates and was proven through the amplified support and encouragement on the field during the second half.

Aside from just working cohesively on the field, Naomi strives to create a unified team, that doesn’t just support each other on the field, but in everyday endeavors.

“I’ve been making sure everyone is really into it. [Klayman and I] like organizing team lunches and getting people ready for the game with spirit [and] making the team something more than just playing together on the field,” Naomi said.