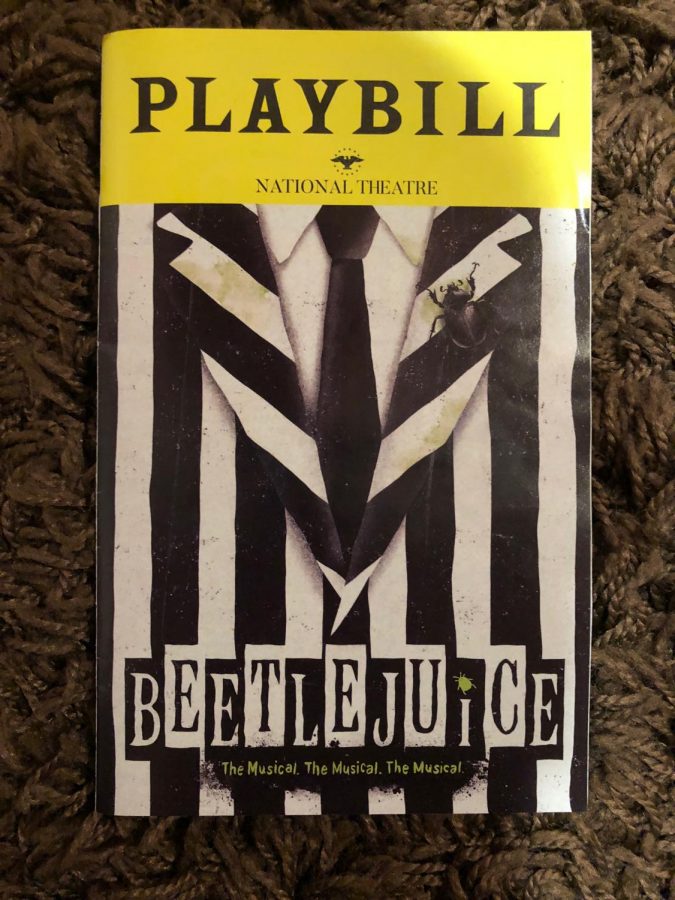 "Beetlejuice," a new musical opening at The National Theater, is well done, but targeted at mature audiences.

The lights were flashing, the music was blaring, the crowd was cheering and my family was smiling. Opening night of the musical adaptation of “Beetlejuice” was a success, even though it was raunchier than expected.

“Beetlejuice” follows a typical couple, the Maitlands, who suffer a tragic death. Beetlejuice, the protagonist of the story, tries to use their death as a way to force the new owners, the Deetzs, to say Beetlejuice’s name three times in order for humans to be able to see him. As a ghost, Beetlejuice is invisible to the living, but if someone says his name three times, he will be visible to the living. Beetlejuice is seen by Lydia Deetz, the daughter of the homeowner Charles Deetz, without her having to say his name, and she eventually helps him haunt and kill strangers.

The lighting and sets contributed to the spooky feel of “Beetlejuice.” The lighting sporadically flashes throughout the play evoking the sound and sight of lightning. Similarly, the originally typical suburban home of the Maitlands ultimately was transformed into the eery home of Beetlejuice in which he lived alongside Lydia which was marked with Beetlejuice’s classic black and white stripes.

Towards the beginning of the musical, each character was introduced through their own song. Interestingly, the genre of each number differed based on the personality of each character. For example, both Lydia’s and Beetlejuice’s first songs are somewhat punk as they are darker characters. On the other hand, the Maitland’s first song is very upbeat and light as they are more innocent and positive characters.

While some of the musical seemed very sweet and appropriate, much of it was inappropriate and more suitable for an older audience. There was a lot of cursing and improper references that at points it was uncomfortable, especially sitting with my family. “Beetlejuice” is definitely not a family-friendly show; however, I would recommend the musical for a more mature audience.

I commend the playwrights for the humor that persisted throughout as well as the fashion in which they addressed loss. Each character in the musical experiences some kind of loss during the musical and each of them addresses it differently, allowing the audience to become better acquainted with the characters.

The main reason that “Beetlejuice” was enjoyable was due to the talented cast comprised of a few well-known faces. Most notably, Beetlejuice is played by Alex Brightman, previously known as Dewey Finn from the Broadway production of “School of Rock.” Other well-known names include Kerry Butler as Barbara Maitland, Rob McClure as Adam Maitland and Leslie Kritzer as Delia Deetz.

Overall, I really enjoyed “Beetlejuice” despite its many inappropriate references. It is important to watch the classic movie adaptation from the late ‘80s in order to understand the many references made throughout the play. “Beetlejuice” is a very clever and witty musical that is worth seeing for a mature audience.

“Beetlejuice” will be playing at The National Theater in Washington, D.C. until Nov. 18.