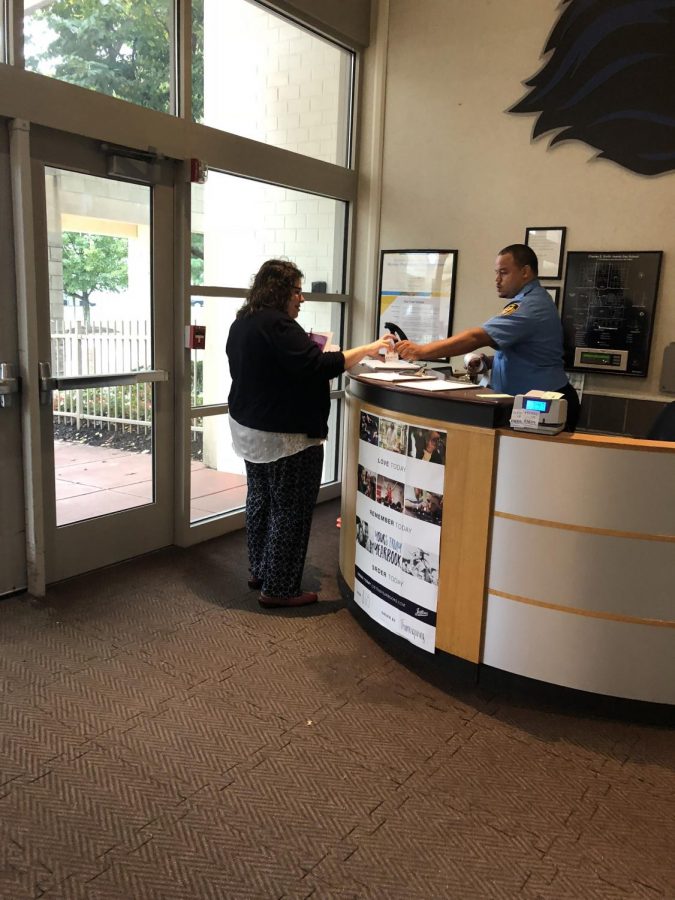 New security guard Frank Robinson of SecTek signs in a parent. It is his first year working at CESJDS.

There has been a common notice among students, faculty and parents when they enter the building each day: a new face at the security desk.

Over the summer, CESJDS administrators decided that the school, both Upper and Lower School campuses, would no longer employ Securitas, the security company that worked for JDS for the past several years. The school switched to a new security company, SecTek, instead.

At the end of last school year, JDS was due to renew its security contract. According to Director of Operations, Security and Transportation Israel Moskowitz, Securitas proposed a bid that was too high of a price for JDS, so they ultimately decided to hire SecTek, a security services company based in northern Virginia.

With JDS no longer using the services of Securitas, former security guards Jamal Hall and Latoya Hall will no longer be working at JDS as well. The new security guard is named Frank Robinson.

Hall currently works at a condominium complex and says that the decision about his employment was between JDS and Securitas and that he had no input on the outcome of their talks.

“If there was a way that I could come back and work at JDS, I would do it in a heartbeat,” Hall said. “I would love to be a security guard at another school, but nothing is the same as working at JDS.”

Another factor in the decision to switch security companies was the level of security and different measures provided by each company. High School Principal and Associate Head of School Dr. Marc Lindner said that Securitas did not fully meet the security needs of the school.

“The school is on an ongoing basis of evaluating what the security needs are for both the Upper School and Lower School campuses,” Lindner said. “After discussion and monitoring for some time, it was felt that it was better to make a change.”

Moskowitz believes that SecTek will provide more sufficient security services than Securitas, as additional measures have been put into place including surprise security inspections, supervisor inspections and new entry systems.

Moskowitz acknowledges that it will take a little time for the news guards to adapt get used to the JDS environment and for the community to get used to them.

Sophomore Joshua Bachrach noted that the new security guards and security practices in place will take time to adjust to, but that they are ultimately in the best safety interests of the school.

“During cross country [practice], when I need to go in through the back door, I need to get a staff person’s ID in order to open the door,” sophomore Joshua Bachrach said. “That’s a struggle, but I understand it is necessary for the security of the school. Jamal and Latoya leaving is another big change that I need to get used to.”