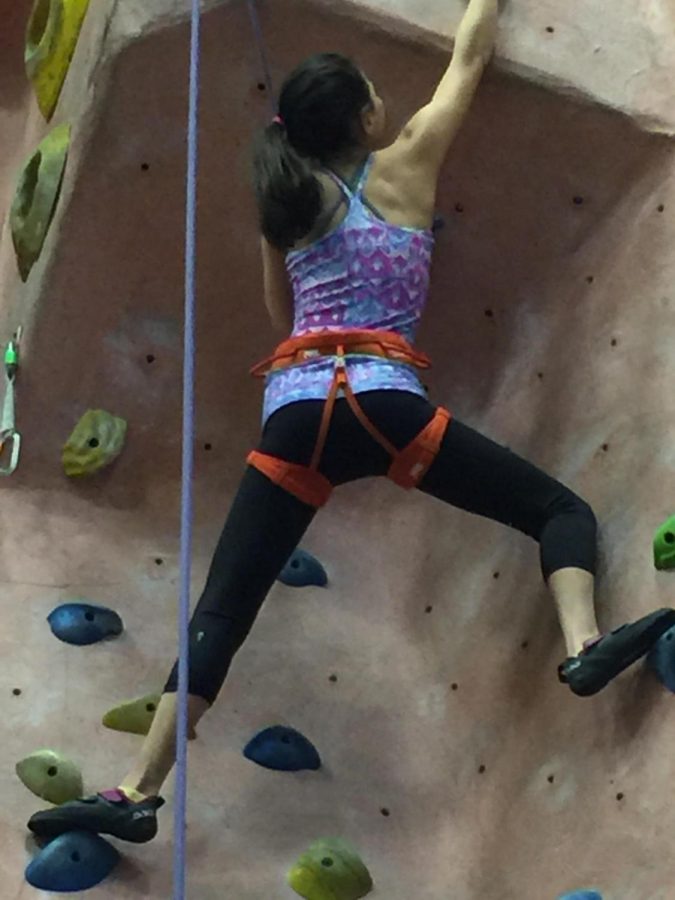 Eighth-grader Shevi Lerner began rock climbing when she was eight years old and has continued with the sport since.

When not in school, eighth-grader Shevi Lerner could be 30 feet in the air clinging to rocks and ascending walls and mountains.

Lerner attended a Bat Mitzvah party at Earth Treks in Rockville when she was eight years old. She realized that she enjoyed climbing and decided to attend a summer camp at Earth Treks. Now Lerner rock climbs at Earth Treks two days a week for about two and a half hours each time.

Lerner has not started competitions yet, but hopes to start competing next year. This may make a difference in how she schedules other extracurriculars and manages her time around the sport.

Lerner says that rock climbing is a hard sport because it requires a lot of physical strength and concentration, and physical education teacher Becky Silberman agrees.

“I remember the first time I went, I got to the top and I was like ‘oh, this is easy’ and I tried to do it a second later and my body had a shutdown. It requires your arms, your core, your legs, and it’s also endurance,” Silberman said.

According to Lerner, rock climbing can get hard at times, but her team members help motivate Lerner to continue climbing.

“I motivate myself by remembering how good it will feel after if I try hard and my friends motivate me…[by] scream[ing] ‘you got this’ or if I do something well [they will say] good job,” Lerner said.

Lerner sometimes gets scared, and does not know the exact reason for learning some skills, but says that overall, she has a fun experience when climbing. Lerner loves her team and thinks that rock climbing has helped her develop friendships that she wouldn’t have had otherwise.

After high school, Lerner is not sure if she is going to continue climbing. However, English teacher Melissa Tomanelli, started rock climbing in high school and still climbs into her adulthood.

A friend of Tomanelli took her to a climbing gym in high school, which was the first time she ever climbed. In college, she joined an outdoors club where she went on many trips and hikes that involved rock climbing. When Tomanelli was a junior in college, her school created a climbing team which she decided to join.

Tomanelli says she currently does not have much time to climb with all of her teaching hours, but in college, she climbed three times a week. One of the reasons that Tomanelli likes to rock climb is that it involves problem solving and strategy.

“The gym I used to climb at was very small and it had a community to it so you would show up and know everyone there and you would work with people on a problem,” Tomanelli said.

Despite loving the sport, she says it can be hard to learn the technique and how to listen to people helping the climber. In the beginning, one of the hardest things is learning to trust the equipment, according to Tomanelli.

Tomanelli still enjoys climbing every once in a while and does not plan on stopping any time soon. She thinks that the skills and lessons that she has learned from rock climbing can be applied to her daily life as a teacher and as a person in general.

“One of ways that [rock climbing] applies to life is that there are more than one way to solve a problem … so it is just a matter of trying things out and seeing what works best for you,” Tomanelli says.