The Lion's Tale • May 30, 2018 • https://lionstale.org/4816/features/families-in-uniform-community-supports-relatives-of-soldiers/ 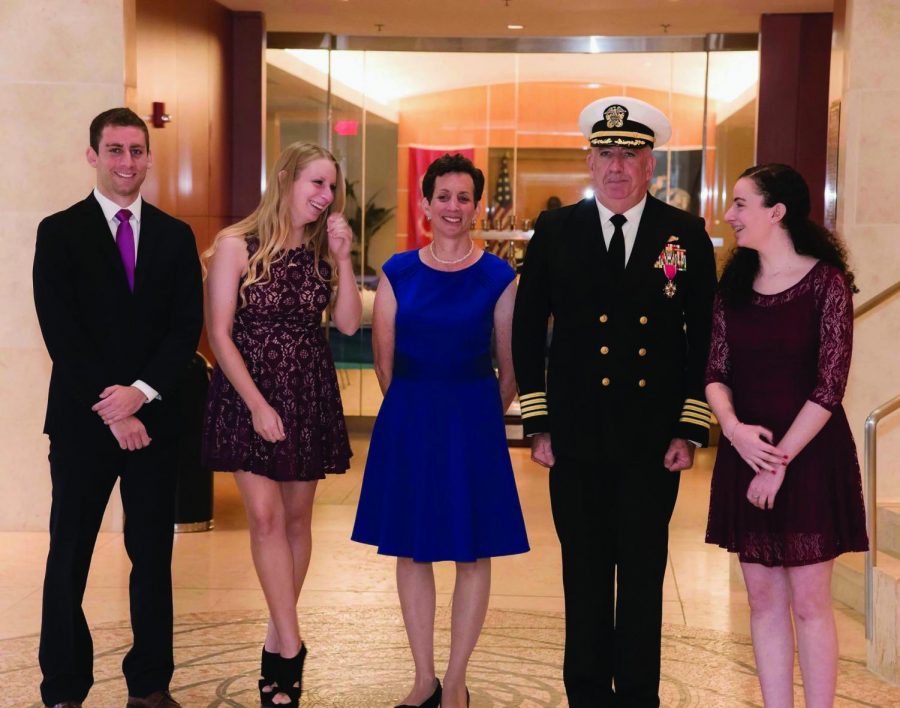 Junior Abby Elson and her family celebrate her father’s retirement from the navy. They attended his retirement ceremony in October 2017.

While junior Abby Elson watched her father’s Naval retirement ceremony, tears came to her eyes as she recognized the magnitude of her father’s commitment.

Many faculty members and relatives of students serve or have served in various positions of the military. Some served in the Israeli Defense Forces, while others, such as Elson’s father, served in the U.S. military.

The Elson family has lived in Annapolis, Md., San Diego and Rockville, Md. over the course of Elson’s life. To move so often is not unusual for military families. According to the Professional Counselor, an online social work resource, the average military family will move between six to nine times, moving every two to three years on average.

From the moment Elson was born until October 2017, the end of her father’s service as the Navy-Marine Corps Chief of Chaplains, she has been surrounded by the military. The constant relocation that is a part of being a military family has caused Elson to learn how to adjust to new environments quickly.

While Elson had to cope with frequent moves, she also appreciates the  “chance to stand out … and get to experience something that not that many others get to experience.” She takes pride in the resilience and easy-going nature that she developed after having to rebuild her life every few years.

Despite enjoying military ceremonies and other related events unique to relatives of members of the military, Elson worried about her father during his service for a variety of reasons. When she moved to Rockville before eighth grade, she had trouble with the transition. Elson saw that her peers were already settled into the environment, while she had to adjust to her new surroundings. While CESJDS provided a supportive community for Elson, she still felt as though there were some things about her life that the other students didn’t quite relate to.

“The hardest part of being a military child is that no one truly understands what we’ve been through,” Elson said.

Elson shares her emotions with high school guidance counselor Melissa Gartner, who provides a safe space. Gartner has been able to recognize many of Elson’s struggles and has supported her in various ways, such as attending Elson’s father’s retirement ceremony. Gartner went to the ceremony in order to understand the process, learn what other students experience while having a relative in the military and gain insight into how to properly assist fellow students who may be struggling.

One way that JDS strives to acknowledge the service of teachers and relatives of students in the U.S. military is through the annual Veteran’s Day assembly. High School Principal and Associate Head of School Dr. Marc Lindner believes that this assembly strives to include all students, family members and faculty who have served in the armed forces.

“For Veteran’s Day, I have been pleased for the last two years that we have recognized the families, we’ve had a program, and we’ve tried to include as many people as possible in the reading of names of people who have been in the military,” Lindner said.  “We are committed to being as flexible as possible if there is anything that a family member may need to do that would be related to their family member’s service, such as attending an outside event or ceremony.”

Similarly, JDS holds a ceremony for Yom Hazikaron in order to honor those who have served in the IDF. This ceremony is particularly emotional for junior Hadas Dubrawsky as her brother, alumnus Isaac Dubrawsky (‘15), recently served in the IDF, and she too aspires to serve in the IDF. However, the prospect of death for Dubrawsky with regards to her brother and herself in the future is something with which she struggles.

“After the ceremony, I am always sobbing; it is always that explanation that that could be me. It is extremely hard to imagine,” Dubrawsky said. “On one hand, I deal with the fact that I am more than willing to give up my life in order to protect a place that is my home, but on the other hand, it is also, how do you [theoretically] continue after you lose someone so close to you?”

Isaac’s service ended a few months ago, but during his time, he occasionally saw combat close up. Dubrawsky did not worry about Isaac’s safety all the time; however, she was concerned when there were several stabbings in the West Bank aimed at Israeli soldiers.

Dubrawsky said, “He would call and tell us that he is fine, but at the same time, you don’t want to see a loved one in a dangerous situation. There is always a little bit of extra stress in the back of my mind.”