Clinton tells all in “What Happened” 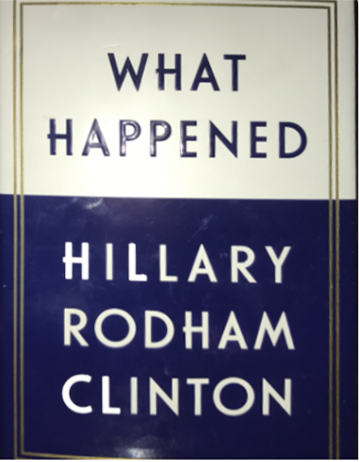 After losing the 2016 presidential election, former Secretary of State Hillary Clinton experienced a tough few months but wasted no time to prove that her presence and voice were still essential in Trump’s America. She decided to share her experiences from the election in a memoir titled “What Happened.” The book came out on Sept. 12, 2017, and quickly sold out, leading to a second printing.

In her memoir, Clinton focuses on her thoughts during the campaign and examines some of the controversies with an eye towards preventing similar predicaments in the future. Clinton takes the reader through events starting with the inauguration, then moving back in time to her initial decision to campaign and eventually to Election Day itself. She discusses why the election ended as it did throughout the book and ends with a chapter called “Why,” where she explores the reasons in more detail.

One topic Clinton specifically mentions is Russian President Vladimir Putin’s relationship with President Donald Trump. She writes that Putin directly ordered a Russian campaign to meddle in the 2016 presidential election to boost the Trump campaign.

Clinton includes letters from her fans in her memoir throughout the entire book, which is a creative way to convey individual experiences. The authors of the letters share how Clinton impacted them and how she taught them to persevere in Trump’s America. The letters stand in contrast to much of the book, which is geared to blaming herself for losing, apologizing for her “dumb” email management and for saying she would put coal miners “out of business.”

The former first lady also writes how sexism was a huge downfall in her campaign by thwarting her ability to reach out to voters substantially. She writes, “The moment a woman steps forward and says, ‘I’m running for office,’ it begins: the analysis of her face, her body, her voice … It can be unbelievably cruel.”

The attacks stay within the Democratic Party as well. Clinton blames Bernie Sanders and blames him for a lot of her loss. “I finally challenged Bernie during a debate … Nonetheless, his attacks caused lasting damage, making it harder to unify progressives in the general election and paving the way for Trump’s ‘Crooked Hillary’ campaign,” Clinton writes.

After the election, Clinton struggled with what the future would hold for all Americans, specifically for women, members of the LGBTQ community and immigrants that she spent her campaign tirelessly fighting for. Now, there are different movements such as Women’s and Science Marches that are experiencing monumental accomplishments despite the hatred they receive. Clinton remarked in her concession speech and in her book that, “we have still not shattered that highest and hardest glass ceiling, but someday someone will — and hopefully sooner than we might think right now.” Clinton’s optimism gives readers a sense of hope for the future despite the setback of the election.

As someone who has never been that politically savvy, I think Clinton provides an excellent explanation of the specific difficulties she experienced, including the investigation of her emails, Putin’s alleged meddling and the spread of fake news. Despite living in the greater Washington, D.C. area, an environment that revolves around politics, I now feel more knowledgeable on political issues than I did prior to reading her memoir.

Even if one disagrees with her policies, I highly recommend reading “What Happened,” to learn about Clinton’s remarkable journey.

“What Happened” is sold at local bookstores for $14.99 and is available in eBook form.