Season finale lives up to the “Euphoria” standard 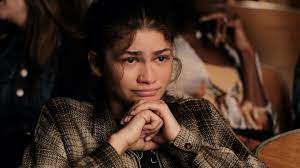 Rue, played by Zendaya, becomes emotional while watching the play her childhood best friend puts on.

As I closed my computer after watching the season two finale of the HBO original hit-series “Euphoria,” my eight-week-long routine of tuning into the show every Sunday came to an end.

The finale continued where the last episode left off, with Lexi’s play. The play was about Lexi’s experiences of friendship, growing up and growing apart from the people that are thought to be one’s safe haven. It specifically focuses on her role in stories that are typically seen from a different character’s perspective. It features Lexi (as herself), Marta (Maddie), Hallie (Cassie), Rue (Jade) and Kat (Luna).

As the episode played out, the storyline would switch seamlessly between reality and the scenes in the play that reenacted it. It created this strange, uneasy feeling to see the actual characters in scenes switch off with their doppelgangers.

As the play progressed, Elliot and Nate’s scenes felt out of place. Because their stories weren’t actually in the play, when I saw them on screen it felt out of place and pulled the viewer out of the fantasy that Lexi’s play created. Their stories felt as if they were added just for the sake of having some sort of ending to their plot lines.

This was especially evident in Nate’s scenes. It felt like Nate’s confrontation with his dad was added only to write Cal out of next season, and was honestly boring. There was no unexpected twist and it was pretty tame in comparison to Nate’s other scenes earlier in the season, where he acted violently and threatened both Fezco and Maddie at gunpoint. This weird encounter with his dad felt both lackluster and out of character.

Additionally, Elliot’s scene felt really slow-paced and quiet. In this scene, Rue went to apologize to Elliot, and the two rekindled their friendship. Elliot sang Rue a four-minute song, with far too many awkward shots. The song wasted four minutes that could have been added to a more interesting storyline.

While the intense play was going on, it cut to scenes detailing the dramatic situation at Fezco’s house. At his house, Custer, Fez’s supplier, had come over with the intention of recording and keeping Fez in the house. He was cooperating with the police and ratted out Fez and Ashtray, Fez’s little brother, for killing Mouse.

From the episode’s teaser, I was anxiously awaiting the outcome. I believed and expected Fez to die. He was a beloved character, and killing him would pull on everyone’s heartstrings.

When I saw what actually happened, Ashtray stabbing Custer in the neck, I genuinely gasped. In the premiere of the season, we saw Ashtray kill Mouse, one of the higher-ranked members in the drug ring that is featured in “Euphoria.” Everyone knew that this murder would lead to something big happening, but truly, this was unexpected. It was a really nice way to wrap up this unanswered issue, and it fits into the storyline really well. Astray’s murder of Custer also perfectly aligns with his behavior, as we previously saw that he is very capable and eager to murder.

Throughout both seasons, we have seen the extremely strong bond between Fezco and his brother. We have also seen how Ashtray’s character was extremely pragmatic and serious. He always came off as mature and even honorable in some ways. So, when the police that Custer had called were approaching, Ashtray’s response of barricading himself in a bathroom with what seemed to be every weapon available to man, made sense. He ended up dying while fighting the police, however, I felt his death was appropriate to his character. Ashtray wouldn’t want his brother, Fez, to take the fall for him, and he would want to go down fighting.

The one scene that really solidified this episode’s greatness was the long-awaited fight between Maddie and Cassie. Finally, I was able to soothe the anger I held towards Cassie’s character and see her receive some long-awaited karma. I do however wish that Maddie had roughed her up just a bit more, but that’s more because of the personal grudge I hold against Cassie.

Overall, yes; the episode did have some shortcomings, but it still lived up to the “Euphoria” standard and ended the season nicely. The episode left a pretty big cliffhanger regarding Fezco and provides a good jumping-off point for season three.