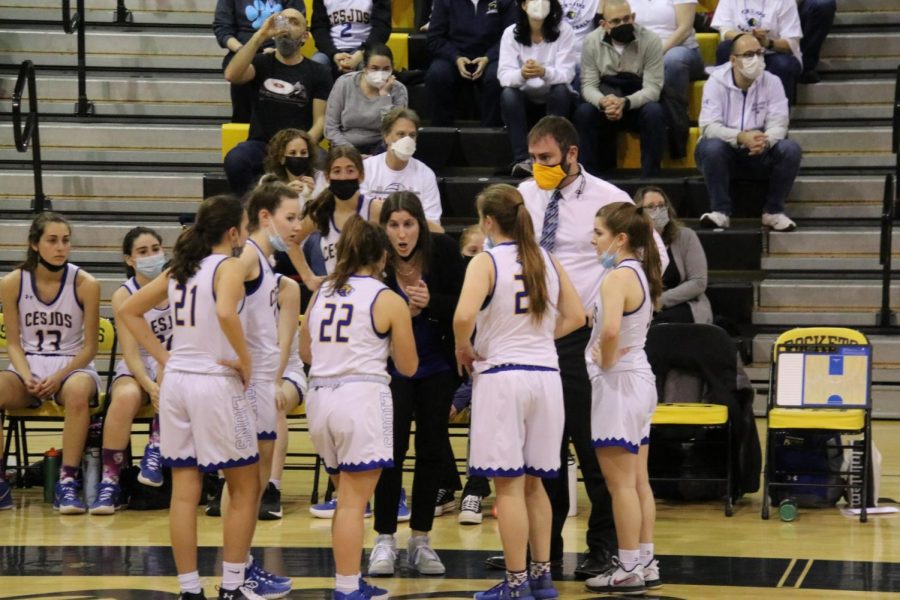 The girls varsity basketball team huddles for a timeout during the championship game. Senior and co-captain Avital Friedman said that during one timeout the team discussed the importance of being in control of how they play.

The entire CESJDS student section was on its feet cheering as the Lions won the tip-off to start the Potomac Valley Athletic Conference (PVAC) championship game. Sophomore Shani Schwartz drove quickly down the court for a layup putting JDS up 2-0. Schwartz scored the Lions’ first six points of the game.

However, JDS’s early lead was short-lived as the Melvin J. Berman Hebrew Academy Cougars finished the first quarter leading 19-18. Berman continued to build their lead in the second quarter, finishing the half up 41-29.

The third quarter started poorly for the Lions as the Cougars went up by as much as 20 points. While JDS made a run at the end of the fourth quarter to cut the deficit to nine, they were unable to complete the comeback, losing 52-66.

“I am proud of them,” Athletic Director and girls varsity basketball coach Becky Silberman said. “In the second half, they left everything out there that they could, and then they had fun.”

The girls varsity basketball team finished first in their PVAC division during the regular season for the first time since 2014. They were, however, unable to close out the final and most important game of the season. It was the first time in the history of the Berman and JDS rivalry that these two teams faced off in the finals, according to Jewish Hoops America.

“I am definitely heartbroken,” senior and Lion’s co-captain Avital Friedman said. “I think that this team is really special and it’s just a hard team to walk away from.”

The officiating was a major talking point of the game as there were a total of 37 fouls between the two teams. Silberman and the majority of the JDS team were visibly upset by some of the calls. The frustration peaked when junior Talia Sporkin fouled out late in the second half.

“If a ref makes a bad call, I am not blaming the refs, [but] we change how we play,” said Silberman. “We kind of let that get to us.”

Friedman shared that sentiment as well, saying that while the team may have disagreed with some of the calls, they tried to be consistent in doing what they could control.

Despite the upsetting loss, the JDS community was able to look at the bigger picture and the significance of this game.

“I think it was a big win for Jewish sports to have both the Berman and JDS teams be in the finals,” sophomore Eliot Rogal, a fan at the game, said.